How is Kennett Square the Mushroom Capital of the World? 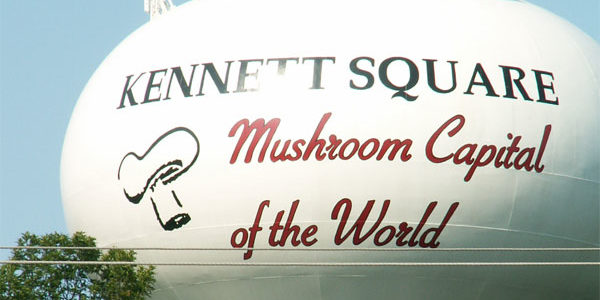 How is Kennett Square the Mushroom Capital of the World?

How did a small town in Pennsylvania because the Mushroom Capital of the World? That is a great question and certainly one worth discussing today. It’s interesting to note that about 50% of America’s mushrooms come from the area around Kennett Square. At Kennett Mushrooms we are very proud of this heritage. In fact, one year for New Year’s Eve an 800 Pound Mushroom was dropped instead of a “ball” like you see in New York City! But how on earth did this small town on the east coast grow into the Mushroom Capital of the World? When we delve deeper, it’s actually a really fascinating story.

According to local legend, in Kennett Square 150 years ago (or so) a couple of Quakers decided to grow mushrooms in an otherwise not used space under the elevated beds in their greenhouses. As word spread throughout the town of this ambitious venture, more and more farmers tried their hands at mastering the craft. Although this seemed odd for the area at the time, Kennett Square did have a natural advantage over neighboring towns. Kennett Square was close to a very large city which meant that they had more than enough horse manure to go around. This is not only an ingredient for growing delicious mushrooms today, it is steeped in rich history and makes for a cool story.

In fact, just outside the town lies roughly 20 acres of steaming compost, made up of horse manure, hay and cocoa shells from the nearby Hershey chocolate factory. According to local mushroom farmers this is a secret ingredient in making spectacular mushroom food. The amazing compost mix is pasteurized and mushroom spores are inserted inside, then they are allowed to grow. For days the fungus grows and grows until the temperature, water and carbon levels reach the perfect level for the fungi to reproduce. All of this takes place inside temperature controlled buildings that are windowless, leaving onlookers to wonder where all the magic is happening. There are many producers of mushrooms in Kennett Square, Pennsylvania but one company has emerged to reign supreme.

Enter Kennett Mushrooms, producer of the finest Shiitake, Oyster, King Oyster, Maitake, Pompom, Pioppino and Crimini Mushrooms on the planet. The company is now comprised of 5 businesses all working in concert together: KSS Sales, Kennett Square Specialties, Caputo & Guest Mushrooms, Highland Oysters and KSS South. But their story begins many years before that, originating in 1977 when two young men decided to take a shot at entering the mushroom business. Kennett Mushrooms was founded by Lou Caputo and Herb Guest from very humble beginnings but through sheer determination, commitment to excellence and customer centric values have grown by leaps and bounds over the years. Now Kennett Mushrooms has truly emerged as the premiere source of exotic mushrooms for major corporations and restaurants chains in America and beyond.

We hope you tune in again soon to learn more about the wonderful world of mushrooms. At Kennett Mushrooms, mushrooms is a way of life and a source of happiness.